I mentioned in my review of the Tantus Ryder that, while being my go-to plug, it is not my favorite. That honor goes to this very special plug: BOSS Silicone Stopper IV by MODE-DESIGN (in all caps as is typical of Japanese usage of English). 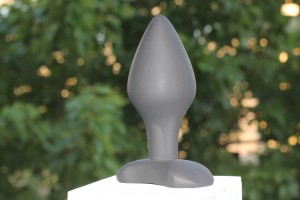 While on vacation in Japan, I stopped into one of the many adult shops in the Akihabara district of Tokyo. As I browsed the shop’s five or six floors, I was amazed to come across this set of butt plugs. I would normally expect to see a few cheap, plasticky “novelties,” but these were made out of silicone, arguably the best material for anal toys due to its non-porous, sterilizable nature. And they were cheap too, around $25! Quality silicone toys like these often go for double that online. It was too good to pass up and my ass was hungry, so I bought the biggest model, a little bottle of Astroglide, and put it all into my backpack. I met up with my travel partner to hit up our next sightseeing destination, the Tokyo Government Building, which we planned to go to the top of before leaving for home that evening.

When we arrived, I noticed that they were doing bag inspections. I couldn’t let them or my friend see what I had just bought. So I turned back to dispose of the evidence. And what better way of doing that than hiding it in your butt? I found a bathroom, took the plug out of the box, and examined it.

First thought: It’s sooo smooth. It has a satiny matte finish like nothing I’ve ever felt before. The closest thing I can think of to compare it to is the “soft-touch” rubber backs appearing on some cell phones now. Now that I think about it, the finish on the Tantus A-Bomb comes close, but it’s still not nearly as nice as on this BOSS Stopper.

I put a little bit of lube on it and began to slide it in, conscious of the people just outside the stall door. My ass protested to its 2″ girth—it had been weeks since I had used a butt plug, and normally I’d need to warm up for one this big. With a little more lube, and a lot more pressure, I managed to get the plug in. It hurt, but it was in. I pulled up my pants and walked back out to the streets of Tokyo, my ass completely stuffed.

Thankfully, due to the plug’s slim neck, I adjusted relatively quickly. At 7/8″ wide, the neck is no bigger than a thumb. The base is pretty small for a plug of this size, measuring 3.25″ long and 1.25-1.5″ wide. The base has an hourglass shape which helps it to fit well between the cheeks, and feels very comfortable standing, walking, or even sitting for long periods of time. The bottom of the base does exhibit some hard right angles, but being 1/2″ thick, it sticks far enough outside the cheeks not to cause any pinching or irritation. Here it is next to a soda can for comparison: 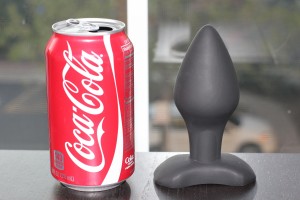 The BOSS Stopper ended up feeling so comfortable, and the large 2″ bulb sitting just inside felt so good against the lower part of my prostate, that I decided to keep it in for the rest of the trip and the 16 hour plane ride home. The only thing I made sure to do was to take out the small metal ring that came on the bottom, so as to not set off any metal detectors when going through security at the airport. The small metal loop which the ring attaches to is not removable, so I was still a little worried about setting off the detectors. Needless to say, going through airport security was nerve-racking and exhilarating. 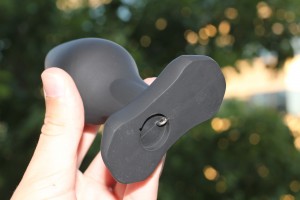 I made it through security (twice) without a hitch, though I would not attempt that again now that we’re in the era of backscatter X-ray machines.

Since that trip, I managed to wear it on a 12 hour car ride, and on another occasion, I kept it in for five days straight, taking it out only to use the bathroom. The Stopper’s relatively slim neck and small, well-shaped base make this one of the most comfortable plugs I’ve had the pleasure of using, and the thickness of the bulb means it’s still a very intense experience for the duration. I’ve even come up with some creative uses for the ring on the bottom involving small chains and locks 😉 Couple all of that with the one of the nicest, most luxurious materials I’ve ever felt, and you’ve got the complete package: my favorite butt plug.

If you can find the BOSS Silicone Stopper IV in your area or online, buy it!